While traveling for three months in Kenya, Uganda and two areas in South Sudan, Dan taught a two day train-the-trainer program 11 times to a total of 300 attendees. This transformational program was called “Effective Stewardship.”  God impressed Dan to teach people how to use the resources (time, money, and land) that God had already given them and how to discover and root out the subtle little lies from the Enemy that stood in direct contradiction to the truth in God’s word. He used true and false questions and scripture after scripture to help people differentiate between lie and truth. Included in the training was a focus on high value horticultural crop production which had great market potential in the areas where the trainings were being held.

People came with looks of desperation on their faces and desperately seeking for someone to give them a loan, a grant, or handouts. When they left they were filled with hope and were eager to work, utilizing the opportunities of production and marketing of high value crops on their own land, instead of looking for a handout from an aid agency. 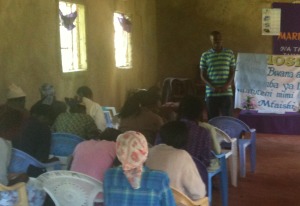 It gets even better! Dan was able to mentor two young men, one is on our staff in South Sudan and another from a group called Heaven’s Family in Kenya.  He involved them in the teaching process and every training they taught a larger and larger portion of the material. At the end of the tour, they were teaching nearly all the course and Dan was there just for fielding a few questions. The exciting thing is that both men learned the material thoroughly and were able to teach it in the heart language of the students.

By gaining the experience of teaching the program, these two men are no longer dependent on an outsider to teach. They can now continue to share these lessons with others in the community. Praise God, and give Him the credit for the work He is strategically doing to empower the local people to solve their own problems and build God’s kingdom while helping them lift themselves out of the cycle of poverty.